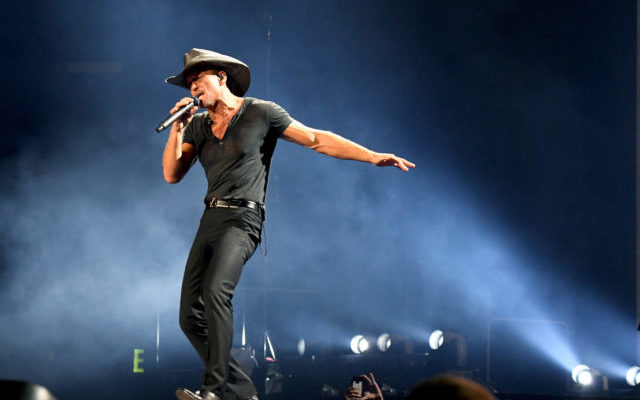 Summer’s already heating up after Tim McGraw announced Monday that he’ll hit the road later this year on his Here on Earth tour. “We’re gonna do our Here on Earth tour this summer. We’re gonna start in July. It’s gonna be a fun time,” McGraw said in a Facebook video ahead of his performance later in the day at the College Football Playoff National Championship in New Orleans. (He’s apparently rooting for LSU over Clemson, judging by his choice of shirt in the clip.) He added, “Lotta new songs.; We’re gonna go back through all the stuff that we haven’t played in a while and play some of that stuff…So, it’s gonna be a summer, a lotta fun.”

He’ll be joined by openers Midland and Ingrid Angress–and on certain dates, he’ll also be joined by Luke Combs. The Boot notes that the tour kicks off July 10 in Syracuse and will play such cities as Charlotte, Raleigh, Toronto, Austin, Houston, Dallas, Phoenix, San Diego, L.A., Philadelphia, and Atlanta before wrapping up on September 26 in Chicago. Tickets will begin going on sale on January 24.

Thomas Rhett is prepping hard for tour season: “We rehearse ourselves into the ground”

The Guys Confessed Where They Stand on Traditional Masculine Things