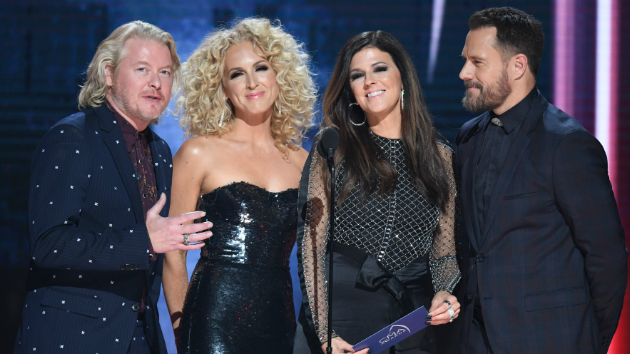 Little Big Town’s song “The Daughters” has captured the attention of fans and critics alike, and was recently nominated for best country duo/group performance Grammy, the AP reports. The band debuted the song at last April’s Academy of Country Music Awards, and raised some eyebrows with the chorus, “I’ve heard of God the son and God the father/I’m still looking for a God for the daughters.” In fact, the band even had a protestor show up at one of their shows, says singer Karen Fairchild. “Somebody saying we were going to hell. I mean, you’re talking about four people who grew up with faith in the church.” Singer Kimberly Schlapman had one response to the protester: “No, we’re not.” The band have some experience with controversial songs, as 2014’s “Girl Crush” met resistance with some who felt it was about a same-sex relationship.
However, that song went #1 and won two Grammys and two CMA Awards. The band was confident that “The Daughters,” would find an audience. “When Karen brought the song to us, I identified with every line, especially growing up in the South where those kinds of expectations are placed on young women,” said Schlapman. Little Big Town kicks off a headlining tour Thursday in New York City.